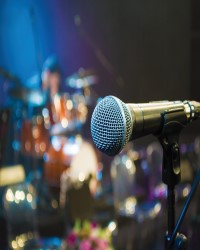 Live concert by Jesse Collins World Premiere! When four young musicians were hired to be the backing band for aspiring singer, who knew that their paths would lead in different directions and span countless hits. That was the birth of the Eagles playing for Linda Ronstadt in 1971 before both acts became hit machines with platinum records and sold-out concerts. A band, a singer, and all the hits ... what might have been!

Buy To This Event Directions